While the city of Houston is itself the 4th largest city in the United States, Harris County is the 3rd most populous county. In fact, over 16% of the entire population in Texas resides in Harris County. Houston may be the largest city in Harris County, but it’s home to many other cities such as Cypress, Spring, Deer Park, and Pasadena to name a few. Likewise, while Houston has one of the highest violent crime rates in the state of Texas (and on average, higher than the national average), Harris County’s crime rate rests comfortably beneath the national average. While the United States violent crime rate average (on a scale of 1 to 100, 1 being the safest) sits at 22.7, Harris County’s last average was 20.2.

While the last facility, the Federal Detention Center (FDC), is the least likely to be a destination for a Harris County inmate, it’s worth including. If an inmate commits what’s formally charged as a federal crime, they will be transferred to this facility.

If you’re looking for an inmate arrested in Harris County, you can locate them by using their public inmate search here. Additionally, they provide criminal records and other inquiries to help you find all the information you need at one spot.

When it comes to assault, there’s a wide area of potential charges. Depending on the nature of the crime, a judge can formally charge anywhere from a misdemeanor to a felony. A lot of the factors that play into how severe the crime is include:

Depending on the situation, a defendant can walk away from an assault charge with a class A misdemeanor—even if some bodily injury was sustained. However, if the defendant had either a romantic or former romantic relationship with the victim, the crime is much more serious. In fact, even without a deadly weapon or injury—and without the victim prosecuting, even—a defendant can be charged with a first degree felony assault if the victim meets the criteria.

When it comes to bail bonds and fines, that also covers a wide area of possibility. Like previously explained, if a particular assault case included a romantic partner or interest, the Harris County judge may choose to set a high bail bond. The defendant’s criminal history also plays a huge role in the bail bond; depending on their flight risk—or risk to the public—the judge may instead choose not to allow bail as a possibility (or set a virtually impossible bond to meet). For the most part, however, Harris County assault bail bonds are as follows:

Being one of Harris County’s most common property crimes, a burglary charge is completely different from theft and robbery charges. Unlike the latter two, burglary relates to the breaking-in of a building, residence, business, machine, or vehicle. Because of the wide array of possibilities, burglary charges heavily depend on the following:

Naturally, breaking into a candy machine is much different than breaking into a private residence. The possibilities of a formal burglary charge span across a wide spectrum of possible scenarios, but for the most part, assault sentencing guidelines are as follows:

Nearly half of all crimes in Harris County are theft charges. Unlike burglary, theft doesn’t involve breaking into a machine, habitation, or vehicle. Theft is actually pretty straight-forward: it’s the illegally stealing or taking items, objects, money, or anything of value without actual one-on-one contact with a victim. Theft charges in Harris County range anywhere from a misdemeanor to a felony, depending on the value of the stolen item and the criminal’s history. 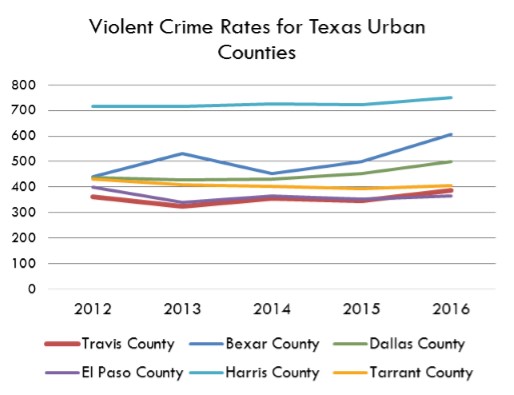 A robbery charge is much, much different than theft and burglary. The reason being robbery is considered a violent crime. Unlike burglary and theft, robbery includes one-on-one contact and interaction with a victim. It’s typically forceful, direct, and hostile. This is why when it comes to robbery, anything less than a second degree felony is rare. As a matter of fact, Harris County has the highest violent crime rate in the entire state of Texas.

As mentioned earlier, if the person committing the crime has a criminal history (either relating to robbery or not), their sentence can be much harsher. As a matter of fact, if they’re considered either a flight risk or high risk the judge may not set a bond at all.

In addition to Harris County’s property and violent crime rate, driving while intoxicated is also extremely common. This charge depends on several factors, including the criminal history of the intoxicated driver and the passengers of the vehicle, if any. For the most part, DWI charges in Harris County can be explained with the following sentence guidelines:

There isn’t a bail bonds company in Harris County that serves like ABC Bail Bonds. As a full-service bail bonds company, we handle everything from contacting the prison to picking up the inmate—and we do it fast.

Moreover, we serve our community and offer free advice, along with in-person consultations—no appointment required. We’re located just blocks away from the Houston County Jail. Our close proximity to the jail allows us to act quickly and pick up your loved one in as little time as possible. Additionally, we offer affordable amenities like convenient payment plans and accepting cosigners.

We are located in Houston, serve the entire Harris County. We make it as easy as possible to bail someone out of jail, any time. Regardless of the bail bond amount, we can release your inmate from jail faster than any other service in Harris County. Ask us how we can help you today; speak with an expert or learn more information by calling calling us or visiting our office.

A DWI conviction requires a blood alcohol level of 0.08% or above, but any driver can be cited for “driving while impaired” by drugs or lower concentrations of alcohol. A DWI arrest and conviction in Texas can cost the accused up to $17,000 or more when you total everything from car towing, impoundment, bail, attorney fees, court costs, hearing and fees to regain and retain a driver’s license, DWI fine, probation costs, fees for extended proof of insurance, and insurance rate hikes. ABC Bail Bonds help individuals get released from jail as soon as possible, giving them more time to organize.

ABC Bail Bonds of Houston has been working with countless criminal cases with hundreds of thousands of people; we know how hefty these bonds can be, and are here to provide bail for anyone, anytime. We approve all bonds by the local owner, and approval from an insurance company in California or the East Coast is not necessary. For more information, give us a call or visit our office and an agent will be more than happy to assist you.

In Texas, a domestic violence arrest will typically be written on domestic violence bail bonds as an “assault” and the charges can range from a Class C or A misdemeanor to a felony, a far more serious offense. The punishment range for a felony is 2 to 10 years in prison. The punishment range for a felony is 2 to 20 years. Either one can carry a fine of up to $10,000. The Class C misdemeanor will not usually require a bond but, rather, a citation with a later court appearance. You can be arrested without a warrant on sight. Once arrested, you will need to make bail, either through cash or and after making bail are usually released within four hours. It is important to contact a bail bondsman as early in your arrest as possible, whether it’s you or your family who contacts the bondsman.

It’s very important to ensure you hire a highly reputable bondsman with the skills and knowledge to represent and assist you well, and we at ABC Bail Bonds will do just that. Domestic violence charges are extremely serious and can end with serious outcomes and repercussions. You want a bondsman whom you trust and work closely.