Did you know Houston is home to Texas’s very first penitentiary? In fact, it’s located just an hour north of what is now downtown. What once consisted of mostly community-driven jailhouses was soon joined by other institutions coming to this area, such as bondsmen and their services. Today, Houston is home to some of the oldest, most established bonds services in the state; and throughout their years of business, have evolved to become as efficient and convenient as possible for Texas residents. In case one isn’t already aware, Houston is one of the largest cities in the nation. As a matter of fact, they’re the 4th largest city in the United States (only behind New York, L.A., and Chicago). In addition to its sheer size, Houston is among the most ethnically diverse cities in the country, with over 145 languages spoken. To paint an even fuller picture, over ⅓ (one-third) of individuals living in Houston over the age of 5 speak a different language—or, not English—inside their homes.

However, with large populations come large crime statistics; and Houston sees its fair share of crime. In fact, Houston’s crime rate compared to the national average is almost double (mostly property crimes). Naturally, Houston has several prisons and detention centers—scattered across counties—but most of their inmates can be found in the following facilities:

While the last two facilities are less populated (or less likely booked), it’s a possibility if an inmate has either a federal case, a state jail felony, or had their probation (or parole) revoked—while also considered a “medium” or “high-risk” inmate.

To easily locate your inmate, you can use Harris County’s public online search—which also includes district and county criminal records—here. 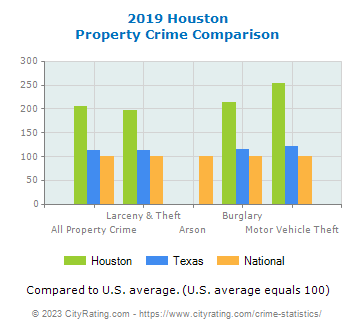 While most may think the first three are somewhat similar, they vary greatly among charges. Likewise, not all aggravated assault charges are the same; the severity of the charge relies heavily on the relationship between the criminal and the victim, and who the victim is.

This crime carries some gray areas in terms of how to formally charge. Depending on the crime (and the criminal), it can be classified as a state jail felony or a class A misdemeanor. Either way, this crime mandates anytime between 180 to 2 years in jail, along with a fine of up to $10,000.

When it comes to setting the bond, it’s completely up to the discretion of the judge. However, certain factors play in (including the criminal’s history) and with a misdemeanor, a bond can be set anywhere between $1,000 and $5,000. For state jail felonies, that amount can go anywhere upwards of $5,000 to $20,000. Since bail is set at 10% of the total bond, an inmate can bail from anywhere between $500 to $2,000.

Unlike theft, robbery involves direct one-on-one contact between the criminal and the victim—which, typically, is hostile. Because that’s the case, robbery typically charges as a second degree felony; this comes with a fine of up to $10,000, and anytime between 2 to 20 years in prison.

For felony bail bonds, inmates charged with robbery can have a bond set anywhere between $5,000 to $20,000, and even more depending on the crime. Additionally, if the criminal is considered a “high-risk” inmate, the judge can choose to either set an impossibly high amount or no bond at all.

Burglary is different from robbery and theft in which it involves breaking into a residence, building, business, vehicle, or machine. However, like robbery, burglary charges vary widely depending on the nature of the crime. For instance, burglary of a coin-operated machine or vehicle is classified as a class A misdemeanor, which carries up to a year in Houston County Jail and/or a fine of up to $4,000.

Burglary of a building, however, is much different. In this case, it would be classified as a state jail felony; this lands anywhere between 180 days to 2 years in Houston state jail (Kegans ISF), along with a fine of up to $10,000. Burglaries even have the potential of carrying a first degree felony charge. If the crime is a burglary of a habitation with intent to commit or sponsor a felony, it’s a first degree felony charge with anywhere between 5 years to life in prison, along with a fine of up to $10,000.

However, aggravated assault—including assault of a romantic interest, partner, or spouse—is anywhere from a second degree felony charge, to a first degree felony. Second degree felony aggravated assault carries anywhere between 2 years to 20 years in prison, along with a fine of up to $10,000. In cases where there’s an existing romantic relationship between the assailant and the victim—or if the victim is a public servant—it’s almost always a first degree felony. This typically comes with a life sentence (or anywhere between 5 to 99 years) and a fine of up to $10,000.

For aggravated assault bail bonds, there’s a huge gray area—depending on, like we said, the relationship between the criminal and victim—due to the uniqueness of each case. An inmate’s bond can be set anywhere between $5,000 to hundreds of thousands, depending on the severity of the crime and the criminal history of the assailant.

DWI in Houston is also very common. However, different charges go for each case, which depend on the nature of the crime and the criminal’s own history.

When it comes to Houston and Harris County, no other bail bonds company serves its residents like ABC Bail Bonds. They’re a full-service bail bonds company, which means they handle everything from contacting the jail to picking up the inmate—all in a timely manner.

Additionally, they offer free advice and in-person consultations with no appointment required. They’re conveniently located just blocks away from Houston County Jail, along Preston and San Jacinto Street. Perhaps one of the greatest aspects of ABC Bail Bonds are all the amenities they offer Houston residents; not only do they pick up and drop off inmates, but they offer convenient payment plans and even accept cosigners.

ABC Bail Bonds is one of the few, if not the only, bail bonds service in Houston that makes it as easy as possible to bail anyone out of jail, for any reason. No matter how big or small the bail bond is, they make sure to bail an inmate out of jail with no time to waste. To speak with an expert or learn more information on how to get a bail bond today, simply call us or visit our office.

In Houston, bail bonds are not only easy to but conveniently mobile. An individual is able to post bond from anywhere, have a bondsman meet you at the jail, and even pick up a defendant upon release. ABC Bail Bonds of Houston’s bail bond services have made it easy to get yourself or a loved one out of jail at any time of day or night, as soon as possible, and from anywhere, so no one has to be detained longer than they need to.

Bail bonds businesses post bonds for all types of cases from to misdemeanor and traffic violations, and non-arrest bonds; non-arrest bonds can be an option for individuals with active warrants to help them avoid time in jail. Weekly check-ins via text for customer convenience to avoid weekly travel to and from the office are also offered. Easy and affordable payment plans for a range of bonds is also an option to help make this experience as convenient as possible.

If clients have a warrant out for their arrest, ABC Bail Bonds can help them determine if non-arrest bail bonding is an option in their case. This option allows the individual to post bond without being arrested and avoid the time in jail. We offer low-interest rates and fast service. Credit cards are accepted, and ABC Bail Bonds performs free warrant checks and provides free inmate information to clients and their families.

Call to get a free quote and more information: ABC Bail Bonds of Houston is available 24 hours a day, 7 days a week, and is the oldest bonding company in Harris County.